Posted by Chris Wristen on April 15, 2017
Posted in: Uncategorized. Leave a comment

I rang in my 36th birthday in 2016 by spending just shy of nine hours – 8:52 to be exact – running, hiking, climbing, and cursing at the trails of the Blue Hills Reservation while running the “Don’t Run Boston” 50K.

Runners scrambling up on the DRB course.

As luck would have it, 362 days later I was back at the Blue Hills to close out my 36th year running DRB again. Based on how the schedule worked out, it gave me a unique opportunity to bookend my year with the same race and, in a sense, use it as a measuring stick for comparing where my fitness, trail strength, and mental toughness were to start and finish my year. Suffice to say, I think I’ve aged pretty well, and surrounded myself with good company in the process. Some of that quality camaraderie played a huge role in the successful run of 2017.

First, a quick recap of the 2016 DRB: Alex and I ran the entire thing together and had a fantastic time, although our – mostly my – skills at following the map and written instructions for the unmarked course were a bit substandard. Alex knew what to expect from the Blue Hills trails from having run there extensively; I got my eyes opened on that day. We missed numerous turns onto unmarked (and some marked) trails, stopped repeatedly to double- and triple-check the map, and ran two bonus miles. Ultimately, we ran and hiked 32.85 miles in 8:52 and were some of the last runners off the trail. I entered DRB that year with one 20-miler on my legs since New Year’s, and it showed.

Fast-forward 362 days, and both of us entered DRB strong. Alex is always strong, but I headed into DRB having put a few hundred more miles on my legs by April than I’ve done by this point ever before (more than 600 miles pre-DRB this year, three 20-plus-mile runs, and a lot more hill training). We’re both preparing for the CCC 101K on Sept. 1, and DRB would be a good gauge of where we are now, as well as a reminder that we have a whole lot more work to do in the months head.

Jeff List leads the way up on the DRB course.

Whereas our 2016 run was typical in many ways of the DRB newbies that we were, our 2017 run was more befitting of DRB veterans – which we are slowly becoming, but which we also directly benefitted from considerably this time.

In 2016, we shared the starting line with Jeff List, who has run the DRB course dozens of times and was using it as a training day for his latest trip to Hardrock. We kept him and the lead pack in our sights for about 3 1/2 miles, and as soon as they were out of sight we got lost and our long day and bonus miles began. This year, we again started with Jeff, and this time my legs didn’t hold us back. Jeff knows the DRB course so well that he doesn’t need a map and could probably run it in his sleep without stumbling. Alex and I were fortunate to strike up a conversation with Jeff during the first mile, and we ultimately spent almost the entire day running together. Most of a dozen or so runners hung together for the first few miles, but the group dwindled to four after eight miles. By mile 11, it was just Jeff, Alex, and me.

Occasionally there would be a brief separation as Jeff would bomb a downhill and surge ahead before we caught up on the flats, or we’d move a bit ahead when he stopped to chat with another runner, only to come zooming back up to us a few minutes later. We were within a few yards of each other most of the time, though, and got to share quite a bit of conversation along the way. 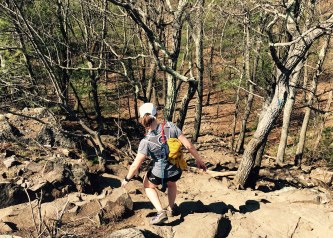 The downhills are steep and technical, too, at DRB.

At its very core, DRB is about running, toughness, and camaraderie, not competition. The absence of course markings – just a map and some written instructions to follow – encourages runners to go together, work together, suffer together, and enjoy their time together from the start to the finish. I love that concept, and it’s a huge reason our day unfolded the way it did with our trio sharing so many miles together. It reminded me of day three at 3 Days of Syllamo in Arkansas in 2013 when I ran about 14 miles with Stu Johnson, a runner I’d looked up to and admired for a long time. I got to know him better during those miles and got to watch how he intelligently managed a long run. Meanwhile, he got me to run tougher on a day when my legs had more to give than I realized. That run was, and still is, important to me. I value opportunities like that, and DRB this year was another one of those opportunities to learn from and get to know a runner who I’ve respected and admired for a while now but hadn’t really gotten to know. Today was special, and it’s a run that I’ll remember for a long time.

Smiles were on Alex’s and my faces we ran up the final hills, wound our way down to Houghton’s Pond, circled the pond and crossed the finish line: 30.8 miles in 6:30 – a full 2 hours, 22 minutes faster than last year. We owed that to our improved fitness – mine in particular, as I held us back last year – but we also owed a wealth of gratitude to Jeff who knew the course flawlessly and shared the day with us.

I’m definitely a stronger runner at the close of my 36th year than I was at the start of it, hopefully a smarter runner, too. And I’m simply happy to have had another crack at this gnarly course and gotten the opportunity to share the day with such fantastic people.