Posted by Chris Wristen on April 25, 2015
Posted in: Uncategorized. Leave a comment

The Kansas Department of Wildlife, Parks and Tourism held the 31st annual Clinton Lake Community Cleanup on Saturday at the U.S. Army Corps of Engineers Park.

Nearly 20 Lawrence Trail Hawks and their family members represented the trail-running community and encompassed more than half of the event volunteers. The group picked up trash, much of it from behind the boat docks, an even removed the remnants of a collapsed picnic table from the woods while cleaning up approximately four miles of trail.

Woody, the park mascot, also made an appearance to thank the Trail Hawks for their service.

A portion of the Lawrence Trail Hawks gather before picking up trash on the trails. 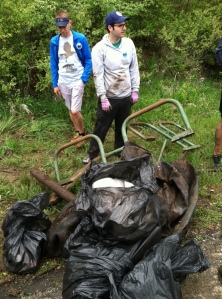 Trash bags and remnants of a picnic table.

Hanging with Woody after the cleanup.