Posted by Chris Wristen on November 27, 2015
Posted in: Uncategorized. 1 Comment

Intense planning went into those missions in 2006, 2007, 2008 and 2009. Early trips to scope out the route and determine precise strategies to maximize speed and efficiency were critical. Success hinged on following the plan to perfection.

Black Friday at the Middlesex Fells.

Yes, Black Friday was a beast, and I got caught up in the madness for a few years. I hate both traffic and massive crowds in general, and Black Friday is the worst of both worlds. The few bucks I’d save by battling the crowds and rapidly knocking out my Christmas shopping seemed worth it, though. I bought gifts for others, but the greater allure of Black Friday was plenty selfish. My mom believed in spending the exact same amount for Christmas gifts my sister, brother-in-law and me – down to the penny. Mom told me the dollar amount for the year, and asked me to pick out what I wanted, and then she would reimburse me for what I bought. That made Black Friday a golden opportunity, and my intricate planning would allow me to get discounts deeper than door-buster pricing on everything from new hiking boots, to sweaters and gloves.

I calculated when stores would open their doors and, as a result, what order I should visit them. I knew which stores allowed you to check out in the electronics section in the back to avoid the long lines at the front of the store. I knew there were repercussions for taking an extra minute to browse for deals on Black Friday, so I’d grab my item and dart to the checkout line to slip ahead of those who hadn’t done their homework.

Most years I executed my plan flawlessly, was done shopping and back home in bed by 7 a.m.

It’s been a few years since I’ve been part of the Black Friday madness. The past few years I’ve spent the day on the trails instead, opting for the calm tranquility of the woods, the adrenaline rush of my heart beating harder while digging into a hill climb, and savoring the satisfaction of a job well done rather than more purchases made.

I was always happy to see so many friendly faces from my Kansas City and Lawrence trail-running friends who I’d encounter on Black Friday in the woods, usually at Shawnee Mission Park.

Today, now in my fourth month living just outside of Boston, I spent the morning on my neighborhood trails at the Middlesex Fells. It was 60 degrees and sunny – absolutely perfect conditions to cruise along the leaf-covered trails, hopping over rocks and charging up steep, technical climbs. Twice I made the climb up to my favorite spot in the Fells – the lookout near Wright’s Tower – to catch my breath and enjoy the panoramic view of downtown Boston in the distance. There were probably a dozen families at the top each time, and I encountered dozens more as I wound my way along the Skyline and Crossfells trails during the course of my run. 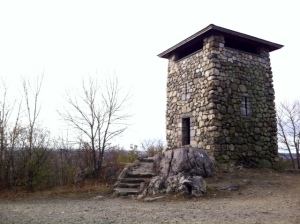 Wright’s Tower at the Middlesex Fells.

I assume there were thousands of people down in the city at their favorite shopping destinations, forking over large sums of cash and fighting for deals. I was happy to not be a part of the rush, instead spending the day in the woods and enjoying the fresh air.

I’m glad to see REI launched its #OptOutside campaign to encourage its employees, customers, and the rest of American society to prioritize outdoor enjoyment over commercial desires, and I was delighted to see so many parents who elected to introduce to their children to the magic of the trails today.

I’ve been a part of both worlds on Black Friday, and I understand the temptations that both present. For me, the reward of the trails always is far more fulfilling.

The view of the Boston skyline from the lookout point next to Wright’s Tower on the Skyline Trail at the Middlesex Fells.