Posted by Chris Wristen on July 31, 2015
Posted in: Uncategorized. Leave a comment

I’m a bit late posting a status update from Sunday’s trail repair work at Clinton State Park, but a little bit of work was accomplished despite a false alarm about rain.

Light rain fell early Sunday morning, July 26, at Clinton Lake, making it 56 out of 98 days that the city of Lawrence, Kansas, has received precipitation. Additional rain was in the forecast, so Gary Henry briefly canceled the trail maintenance day that the Lawrence Trail Hawks had planned. After a weather update, however, the cancellation was lifted, and the plan went forth as scheduled.

Gary, Trail Hawks president Bill Loats, Josh McVey and myself met with Kansas Trails Council steward Neil Taylor at the Corps of Engineers parking lot at 9 a.m. and discussed our plan. Gary, Bill, Josh and I trimmed back overgrowth on the Lake Henry Loop, picked up trash – including a car tire that had made its way deep into the woods – and sawed a few fallen trees. Meanwhile, Neil headed deeper into the park to deal with fallen trees and assess additional damage.

Later that morning, Colinda Thompson and Mike Warner brought a chainsaw to the park to take care of a fallen tree.

Collectively, about 3.6 miles of trail had overgrowth trimmed and trash removed, however the ground was too wet to repair very extensive damage – much of it that appeared to be very recent from bike traffic.

The portion of Blue Trail that has collapsed into the lake will need to be re-routed, and Bill and I identified what should be an easy re-route option pending KTC approval.

There is a TON of work that is still needed to repair the trails at Clinton State Park, but it was nice to have the weather cooperate just enough to allow us to spend three hours in the woods making slight improvements. 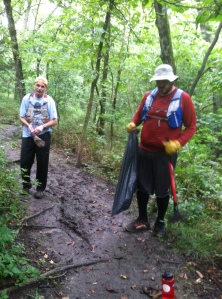 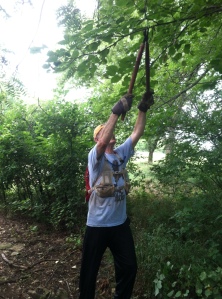 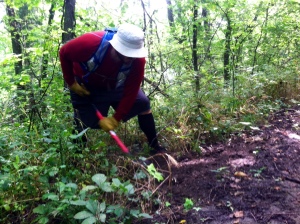 Josh McVey creates a drainage spot on the Lake Henry Loop to allow water to flow off the trail in a sustainable manner. 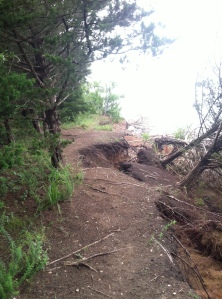 The collapsing section of Blue Trail.