Posted by Chris Wristen on June 14, 2015
Posted in: Uncategorized. Leave a comment

Two months of relentless rain forced myself and most other trail-runners in the Kansas City area off of the dirt and onto the pavement.

It also forced the Lawrence Trail Hawks to shift the inaugural running of the Night Hawk 50K off of the trails at Clinton State Park and onto an alternate course. That course, a blend of 70 percent paved park roads and 30 percent cross-country terrain – would offset its lack of technicality with additional pain.

I entered Saturday’s race like most others in that I was undertrained for the distance due to the considerable amount of time being trapped on pavement as a result of so much rain. Like most others, pavement = less miles for me. In keeping with the trend, race day marked the seventh weekend in the previous eight that heavy rains soaked the area.

Given that my longest run leading up to race day had been 16 miles in 3 hours, I expected it to be a long night at the Night Hawk. Still, it turned out to be even more grueling than I’d imagined. The pavement had plenty to do with it, but – no surprise – so did the weather.

The sun popped out shortly before the 6 p.m. start time, and the temperature quickly shot up into the 80s. The humidity rose right along with it. I didn’t notice the effects too much during the early going, but then a light drizzle began falling an hour into the race. It didn’t last long, but as soon as it cleared the humidity skyrocketed.

I was well hydrated going into the race, and I downed 20 ounces of Gatorade during that first hour, so I thought my hydration should be fine. By the time I’d completed the Bunker Hill and Goodwin Loops, returned to the aid station, and covered the final 2 1/2 miles of park road back to the start/finish to complete my first of three loops on the course, however, my legs were feeling the effects of the heat, humidity and pavement.

I finished the first loop in 1:40 sharp, but the final two trips around the course would be quite a bit slower.

A second wave of rain – this time much heavier – rolled in during the second loop and thoroughly soaked everyone. It also made the grassy portion of the course much slicker. It did, however, cool down the temperature and give way to a gorgeous sunset.

My calves began trying to cramp early in the second loop, and by mile 14 I couldn’t run more than three or four strides without them cramping. My hydration – a mixture of Gatorade and water – was good throughout, so I believe the considerable pavement was the primary culprit. Regardless, the death march began much earlier than I’d anticipated.

I spent much of the next 10 miles putting my head down and power-hiking with the constant mantra to “hike with purpose.” At some point, I hoped, my legs would kick back into gear. Until then, I wanted to cover ground as quickly as possible.

I focused on keeping my mind in a good place, and that was critical during the long, slow miles. While on the pavement, I frequently shut off my headlamp and ran by moonlight, looking up at the stars and being thankful for the opportunity to be out there enjoying it. The other runners and the incredible race volunteers also kept me feeling upbeat.

Finally, around mile 24, my legs returned to the point where I could run a quarter mile at a time before the cramps would return. I took advantage of what my legs would allow, blending spurts of running and hiking the rest of the way. I was at my strongest during the final trip through the grassy section, past the noisy frog pond, across the creek, and back to the aid station.

I spotted Nick Panda on the park road heading inbound to the finish line as I neared the final aid station. He barked out encouragement to me, as he had done a few other times during the race. It was a great pick-me-up, and reminded me that the finish line was just a few miles away.

The final 2 1/2 paved miles went quickly. I ran as much as I could, cruised the two main downhills and hiked the up-hill spots. As I neared the park Visitor’s Center, I heard the cowbells clanging and cheers whooping out as Nick was crossing the finish line. I couldn’t wait to hear it about four minutes later, and the sound put a little extra spring in my step to trot that final half-mile to the finish line.

I finished in 10th overall in 6:09:01 – a bit slower than I’d hoped for prior to the race, but much faster than I thought I’d be when I was forced to power-hike for so long.

The Night Hawk marked my 10th ultramarathon finish line and third-fastest 50K. It was a great wake-up call for my legs as I turn my focus to preparing for the Vermont 50M in September. It will be the first race I’ve seriously trained for since 2013, and have a long way to go to get ready for that one. 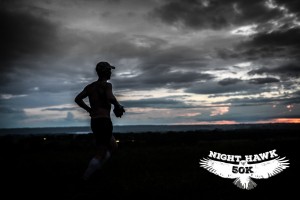