Posted by Chris Wristen on May 2, 2015
Posted in: Uncategorized. Leave a comment

The seventh annual Shoreline Shuffle took on a first-of-a-kind look this year when it transformed into the Skyline Shuffle.

The alternate course, which was a dual-traverse of Bunker Hill, was made necessary due to trail damage. Instead of rugged single-track, this year’s event was a throwback cross country race. 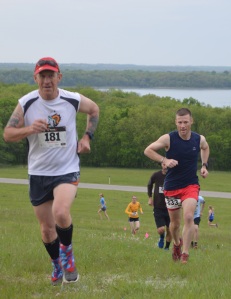 Me (233) charging up Bunker Hill the first time. It wasn’t easy to keep up with Keith. He’s a strong climber.

I’d forgotten how tough it can be to run on grass, with the soft surface sapping some of the spring out of the legs and longer grass catching the toes if knees aren’t lifted enough. At the same time, it’s easier to run the downhill sections with reckless abandon knowing that if you lose control and take a tumble then there’s soft grass to pad your landing.

Skyline was my first trail 5K since Mud & Muck in 2010 (26:10.5), and first race at all of that distance since the Kansas City Heart and Stroke 5K on the Plaza last May (23:18.6). I’m stronger now than I was at those races, and my tolerance for suffering is better, too. I needed that this time.

I started a bit too fast and was around seventh or eighth before quickly slipping back to 10th, but managed to sustain the pace after getting up and over Bunker Hill the first time. I constantly reminded myself to pick up my knees and control my breathing, which were critical for staying in a rhythm and working my way back up to eighth. The final six tenths of a mile were kindly downhill, which was a welcome relief for my legs – and also had a friendly impact on my finishing time.

Kudos to first-time race directors Josh McVey and Matt O’Reilly for putting on a fun, well organized event. Also, Kudos to Grant Holmes for a hard-earned victory. Cross country is still as tough as I remember it from high school, but I’ll happily run this course again. 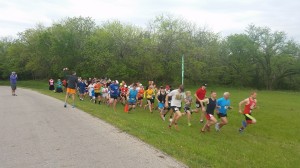 Closing in on the finish line.

Lots of good people made it a fun morning to run!