A TIP OF THE HAT TO A BASEBALL HERO

Posted by Chris Wristen on October 31, 2014
Posted in: Uncategorized. 1 Comment

I don’t know what Charlie Womack was up to for the past decade. I have no idea what he did for his professional career, what street he lived on, the name of his favorite restaurant, his favorite beer, or how he spent his weekends.

We last spoke briefly at a house party in Lawrence. It was 12 or 13 years ago, in a living room with young 20-somethings crammed shoulder-to-shoulder, everybody in everybody else’s way. Charlie stopped in to make a quick appearance before hopping in his black Mustang and rolling out to the next social stop of the night. Charlie and I rode the same bus to campus during freshman year at the University of Kansas, but after that our paths mostly crossed in these passing settings; a handshake and pat on the back at a downtown bar, or grabbing a bite to eat on a whim after bumping into each other at the Student Union.

College does that to people: you don’t stop caring about your friends, but life takes you in different directions and you fall out of touch. It happens to all of us.

There’s plenty about Charlie that I don’t know from the past decade-plus of time, so I certainly didn’t know he was battling kidney cancer until I found out it took his life on Tuesday at the young age of 35. I don’t know anything about his adulthood dreams and aspirations, trips he’d planned on taking with his wife of 8 years – Jennifer – who I’ve never met, or youth sports he planned to eventually coach for their 2-year-old twins and 8-month-old daughter.

I never knew Charlie the grown-up. The Charlie that I knew spent summer days hooking his baseball glove on the handle bars and riding his bike to the park where for hours he’d hit pop flies with his buddies, making up games and conjuring up dreams of being diamond kings. The Charlie that I remember threw harder than anybody at Johnson County 3&2, but with questionable accuracy that made him both a monster and a menace to our opponents.

Yes, the Charlie that I knew was a baseball player. He loved the game, and he was a hilarious, hard-working teammate from fourth through eighth grade on an MKC Electronics squad that was mostly middle-of-the-pack good. We all dreamed of being great, and one day Charlie got his chance.

On one scorching summer afternoon in 1993, Charlie Womack was a baseball hero.

IN NEED OF AN ARM

All baseball franchises face their share of internal challenges. For the boys of MKC Electronics, the yearly challenge was Boy Scout Camp. The team was based out of Holy Spirit Catholic School. As the lone kid from Cure’ of Ars, my Boy Scout troop went to camp a few weeks earlier. Most of the 18-player MKC roster was in the Holy Spirit troop, however, so each year half the team made a 10-day pilgrimage to Osceola, Mo., and H. Roe Bartle Scout Reservation around the Fourth of July. Strategic scheduling with the league office usually offered the good fortune of a bye week while the other boys were at camp.

That season, our schedule included a mid-afternoon game in the middle of the Boy Scout Camp session. Ten players were gone; only eight remained in town to play. We needed an extra body and, specifically, we needed a pitcher.

Charlie fully understood the magnitude of the situation; a chance to crack the top three in the league standings could be lost with a forfeit; this was a big deal.

On game day, his parents made the two-hour drive to camp, and at the crack of dawn they picked him up. They drove right back to Kansas City, weaving through endless miles of construction zones as Charlie ate in the car and put on his uniform. They headed straight for the ballpark.

Sleep-deprived, malnourished from days of surviving on stale camp food and candy, and having not thrown a ball in nearly a week, Charlie climbed out of the car, tied his cleats and headed to the field.

For the 13-year-old little leaguer, this was a Curt Schilling and the bloody sock moment of the 2004 World Series. This was Randy Johnson coming out of the bullpen in Game Seven to collect his third win of the 2001 Fall Classic a night after throwing 104 pitches in victory. This was Madison Bumgarner throwing five innings in relief after already collecting two victories for San Francisco in the 2014 World Series.

In little league terms, this was a legendary moment in the making. This was Charlie’s chance to be a diamond king.

FROM “WILD THING” TO SURE THING

Nobody knew what to expect when Charlie lumbered from the dugout to the pitcher’s mound that cloudless, blue-skied afternoon. How would he shake off the lack of sleep and the cramped legs from hours spent in the car? What impact, if any, would the time off have on his arm angle and release point? And perhaps the biggest question of all – the question every time he ever took the mound: Which Charlie would it be? 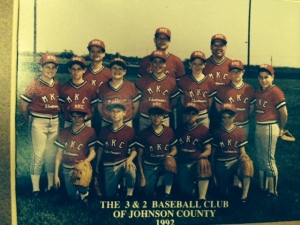 Just like the movie character, Charlie threw all over the place.

To let former teammate Ryan Noonan describe it: “The memory I want to hold onto forever is him standing on the pitcher’s mound at 3&2, beaning two batters in a row to put fear into the other dugout before striking out the next three.”

Charlie’s walk to the mound was familiar, the standard “Womack Strut” with one leg seeming to drag the other along. His jersey was untucked as always, pants sagging just a bit, as he took his warm-up tosses on Field 8, and then the umpire motioned for the first batter to step into the box.

The strong right-hander wound up, cocked back and fired a strike right down the middle, setting the tone for a day when “Wild Thing” was more like a sure thing. He retired the side quickly, and then ambled back to the dugout.

The theme continued inning after inning. Our offense built him an early lead, and Charlie strolled back to the mound to deal some more.

I watched astutely from my post in center field as Charlie unleashed fastballs that whizzed just above the knees and sunk into the catcher’s mitt for a strike. He hummed high heaters to keep the batters off balance. He peppered the inside and outside of the corners of the strike zone with well-placed pitches that left the opposing batters baffled.

The temperature soared into the upper 90s as the innings ticked by. My toes felt like hotdogs on a grill inside my black cleats as the scalding sun beat down on us, and Charlie went from dripping with sweat to drying out with dehydration. During the middle innings he walked off the mound and behind the dugout, threw up a fountain of orange Gatorade that splattered into the dirt, and then stumbled back out to pitch some more.

There was no replacing him, and had we had an available substitute he surely would have refused to leave the game.

Charlie’s barf was like Schilling’s blood; we all fixated on it and understood his agony, and because of it we were awestruck by the way he continued to blend sheer power and crafty placement around the strike zone so effectively.

Inning after inning he roasted in the sun, suffered both mentally and physically, and performed at a level never before witnessed in his career. He scattered a handful of hits, maybe walked a batter or two, and was absolutely dazzling.

Charlie rose to the occasion when his team had no other options, and he put the teammates on his back and carried us to a victory.

As vividly as I still remember Charlie’s relentlessness and precision that day, I also remember seeing him sink into the dugout bench a minute after the final out was recorded. An air-conditioned car ride straight back to Boy Scout Camp awaited him, but for a few minutes his shoulders slumped, his head drooped down, and a relieved, toothy grin stretched from ear to ear.

This was his moment, and he delivered.

Charlie Womack was a baseball hero.

RAISE A GLASS AND TIP A CAP

Johnny’s Tavern was largely empty Thursday night when I walked in and grabbed a seat next to Chris Carmody. The Kansas City Royals, Charlie’s favorite team, had electrified the city in the weeks prior before losing Game Seven of their first World Series in 29 years on Wednesday – the day after his passing. The city was recovering from the playoff-induced hangover, so the bar was quiet. That made it a good place to catch up. Ryan Noonan wandered in a few minutes later to join us.

It was good to be among friends.

None of us had seen Charlie in years. Life happened, and it took us all in different directions. Just like Charlie, Chris and Ryan have young families of their own that understandably are their No. 1 priority. Just like Charlie had become, they are loving fathers and now spend their time changing diapers, reading bedtime stories and trying to create a better future for their children. I’m in a long-distance relationship and run an obnoxious amount of miles most weeks. All of us have steady careers that keep us busy. A look back at the old MKC Electronics roster will reveal similar stories for everybody.

Chris and Ryan are now 35, and I’m 34. Time has gone by so fast. It seems like just yesterday that we were 13 years old, pulling on our jerseys and stir-ups, donning our rally caps when necessary, and laying it all on the line on sunny afternoons and cool evenings under the lights as the boys of summer.

Bruce Springsteen calls them the glory days for a reason. They pass you by, all right, and they leave you with nothing but stories. Fortunately, when it comes to Charlie, they are good stories; happy stories; memories that make us smile. He was our friend, a great teammate, and – for a day at least – a guy who got to live his dream a baseball hero. We spent two and a half hours reminiscing, laughing, and sharing stories about Charlie before midnight drew close and we decided to call it a night. We’re old now, working stiffs, so it was past our bedtime.