Posted by Chris Wristen on January 12, 2013
Posted in: Uncategorized. Leave a comment

Desperation can be identified in many forms.

Some might point to a rash decision made when one has lost hope. Others might make references to running away.

To me, desperation is a grown man and retired athlete rolling with an entourage at a small media gathering where the entourage matches the assembled media in size almost one-to-one, and said entourage’s sole purpose is to serve as a question-blocking shield.

That’s what did it for me.

I always assumed Lance Armstrong took something – maybe not steroids, maybe not EPO or blood transfusions, but something – to help him win seven Tour de France titles from 1999-2005. Maybe it wasn’t something illegal and sinister, but something. And to be honest, I didn’t really care. Most, if not all, athletes at a high level take some sort of supplementation to help their bodies recover from the daily beatings of training and competition. Maybe it’s creatine powder, protein shakes or energy gels. But we aren’t all bouncing back every day thanks to a few glasses of water, a big salad, and some chocolate milk.

Also, so many elite cyclists have been busted for doping, that it wasn’t hard to connect the dots that if all of these other guys are cheating but none of them can beat this one other guy for seven straight years …

My perspective shifted drastically almost two years ago.  It was early March 2011, and I had my first of two journalistic, up-close encounters with Armstrong. The cyclist’s cancer-fighting charity, LIVESTRONG, was given naming rights to Kansas City’s new, state-of-the-art Major League Soccer stadium, so he was in town to help make the announcement. 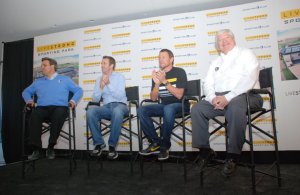 Lance Armstrong was in Kansas City in March 2011 to help with the announcement that his cancer charity, LIVESTRONG, had been given naming rights to Kansas City’s new soccer stadium. Photo by Chris Wristen

I was one of maybe a dozen media members there to cover it, along with the Kansas City Star, the Associated Press, Metro Sports, and a few other TV stations. Locally, it was a huge story. Nationally, not so much.

Actually, let me rephrase that: Armstrong wouldn’t be taking any questions.

Prior to the press conference, we were informed of how the well-choreographed event would go. Sporting KC CEO Robb Heineman, LIVESTRONG president and CEO Doug Ulman, Armstrong, and Sporting KC co-owner Cliff Illig would be seated on the stage in front of us. They would make the naming rights announcement. Heineman would speak for a bit, and then Armstrong would speak for a few minutes. Afterward, Armstrong would leave so the others could take questions. The others also would be available for follow-up interviews afterward. Armstrong – as was his custom anywhere he went – would not.

And really, why would he want to stick around and field questions about how the charity he founded had been given – not paid for – stadium naming rights? I mean, that’s pretty impressive exposure for a charity, so why wouldn’t he want to talk about it? Armstrong’s fear, of course, was that somebody – whether it was in Kansas City’s local media on this day, or at other media gatherings elsewhere – would differ from the script and ask him about doping allegations.

Sure enough, Armstrong entered the room and was quickly whisked to the stage.

About 30 minutes later, an entourage of at least a half-dozen people surrounded Armstrong as he exited, creating a reporter-buffer just in case one of us decided to bail on the press conference, chase him down the hall, and try to pester him about allegations of drug use during his cycling career.

Yes, this entire set-up reeked of desperation on Armstrong’s part. The man with supposedly nothing to hide found it necessary to be guarded at all times, even during events as choreographed as this stadium naming rights announcement.

My second up-close look at Armstrong came a few months later when I was on the field at LIVESTRONG Sporting Park taking photos as Armstrong addressed a sold-out crowd prior to the inaugural game at the stadium. He had an entourage again, although it made much more sense in this setting (give a quick speech, then get up to his suite to watch the game without being hounded for autographs).

Lance Armstrong addresses the crowd at the grand opening of LIVESTRONG Sporting Park in Kansas City in June 2011. Photo by Chris Wristen

That small press gathering in March left me with little doubt that Armstrong was as guilty as the years of allegations claimed he was.

Perhaps that makes me a hypocrite, considering I have no sympathy for steroid users being kept out of the baseball Hall of Fame. Not being outraged at Armstrong cheating in cycling simply because so many of the others in his sport were is completely hypocritical. So is not being outraged about his use of performance-enhancing drugs because he has done so much good for the cancer community. It’s completely hypocritical. I admit that.

Maybe it’s the journalist in me, but my enjoyment of Armstrong is the tremendous complexity to the story. It’s absolutely fascinating. There’s the story he has tried so hard to convince us of for more than a decade; there’s the stories his supporters and detractors have convinced themselves of; and there’s the truth. Heck, there are even more stories woven into those.

Now that he has been banned from competing in most athletic competitions and had his seven Tour titles stripped, Armstrong is desperate to get his life back.

On Monday, he will sit down with Oprah at his home in Texas for what’s reported to be a “no holds barred” interview. He is expected to confess to using performance-enhancing drugs during his cycling career.

It’s the next chapter in Armstrong’s thriller novel of a life that surprises me in so many ways while not surprising me at all in others. As was the case before, I don’t much care if he comes clean. Reality has been clear for a long time.

My only hope is that when Oprah’s big interview happens, she doesn’t have to filter her questions through an entourage of strategically placed bodyguards and media shields and instead is able to usher in a creative new chapter in the Armstrong story: the truth.