THE YEAR THAT WAS, AND THE YEAR AHEAD

Posted by Chris Wristen on December 31, 2012
Posted in: Uncategorized. 1 Comment

What began as a simple suggestion – or a dare, perhaps? – from Shelley Flones in late 2011 drastically altered my plans for 2012 and made for a truly memorable year.

The repercussions of that suggestion will carry into 2013, as well. That’s a mighty good thing.

Flashback to October 2011 when I was pondering making 2012 the year I’d run my first marathon. I was contemplating signing up for the Leadville Marathon since, you know, what better race to do for a first marathon than arguably the hardest trail marathon in the United States with mountains and a climb above 13,000 feet? I love being in the mountains, though, so I figured if I’d be on my feet that long I might as well do it in the mountains

“Why don’t you just run the 50?” Shelley proposed.

So when registration opened in November, I signed up for the Leadville Silver Rush 50-Mile Trail Run. In order to figure out what I’d be starting out with as far as training was concerned, I toed the starting line of my first marathon two weeks later at the Pilgrim Pacer. It was an utter disaster thanks to the stomach flu, but I finished and headed into 2012 with high hopes.

The 2012 season opened with my first ultra marathon in February with Winter Psycho at Wyandotte County Lake Park. Despite temperatures ranging from 7 to 19 degrees, it went fantastic and I finished in 6:22. Then, in April I ran the Rockin’ K Trail Marathon at Kanopolis State Park and finished, but had a train wreck of a performance thanks to a string of self-inflicted mistakes that began the second the race started. I went out way too fast, didn’t hydrate during the first five miles – or eat anything – and the wheels started coming off around mile 5.

All of those mistakes at Rockin’ K were lessons learned that paid major dividends at Leadville. After spending a week adjusting to altitude while camping at Rocky Mountain National Park and visiting friends in Denver, my body was ready to run and my brain was acutely aware of the little details I needed to manage throughout the race. 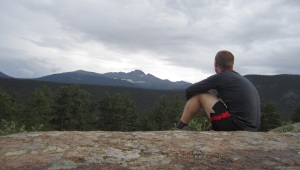 Silver Rush went fantastic for 37.5 miles as I paced appropriately and managed my nutrition effectively while navigating the first three climbs above 12,000 feet. A left foot injury creeped up during those final miles and killed my pace, likely costing me a sub-11-hour finish. Otherwise, everything about the race exceeded my expectations, including finishing in less than 12 hours.

Shelley’s challenge proved to be doable after all. I finished the 50-miler.

The foot injury from Leadville lingered for a few months, and it sidelined me almost completely for September, before I was back running consistently. The final three months of the year included some of my hardest training ever as I re-established my mileage base and built my 2013 race calendar. I ran 19 1/4 miles and took a 25K finish at Dogwood Canyon when the foot flared up, and then finished the 50K at Dude, Where’s the Trail? in November. The final three months of the year all were 100-plus-mile training months. The 148 in November marked my third-biggest mileage month ever, with the 150 in December trailing only my 182-mile June.

So, to recap, the original plan for 2012 was for it to be the year of my first marathon. Instead, it became my introduction to ultras as I finished my first 50K, my first 50-miler, and my second 50K while logging 1,251 running miles for the year.

With three ultras in the books, and a great deal of enjoyment coming from the entire process of training for and running those distances, ultra marathons will play a major role in my 2013 running plans.

I’m headed to West Texas in January for the Big Bend Ultra Run 50K at Big Bend National Park. March will feature a trip to Mountain View, Arkansas, for 3 Days of Syllamo (50K/50M/2OK). From there, the schedule remains in flux but likely will include a return trip to Dogwood Canyon and definitely will include another running of Dude, Where’s the Trail?

There will be more to come soon about the 2013 schedule, but there’s no doubt the groundwork for next year has been paved by a truly remarkable 2012. And for that, I sincerely thank Shelley for her 50-mile suggestion that challenged me to push my limits this year.

One comment on “THE YEAR THAT WAS, AND THE YEAR AHEAD”