Posted by Chris Wristen on September 3, 2012
Posted in: Uncategorized. 1 Comment

I asked my sister for permission to join the newspaper staff of the University Daily Kansan.

It was near the end of the Fall 1998 semester. She was a reporter, and I was an eager-eyed freshman who wanted to write but didn’t want to infringe on her space. Asking for permission, it seemed, was the right thing to do.

Liz knew writing was in my blood, though. When we were kids, we made a fake community newspaper at grandma’s house detailing the important activities of our stuffed animals, listing movie times we copied out of the real newspaper, and cutting and pasting comic strips. Later, she saw my work for the high school paper, and knew it was my passion. When I asked her if it was OK for me to sign up for the Kansan, she never hesitated.

“Stop by the newsroom, and I’ll introduce you to who you need to know,” she instructed.

A few days later, I pushed open the door to the newsroom in Stauffer-Flint Hall. Liz was sitting at the computer to the right, plucking away at a story. She hopped up, introduced me to the new sports editors, Erin Thompson and Marc Sheforgen, and handed me an application.

In the week that followed, I pondered which beat to apply for. Knowing I wouldn’t have a chance at spring football or baseball, I made up a position that wasn’t listed — women’s soccer spring season reporter — figuring if nobody else could apply for it then they couldn’t turn me down.

Sure enough, that became my beat, and I walked into the newsroom the week before the Spring 1999 semester began as a member of the staff.

The Spring 1999 sports staff from my first of nine semesters with the Kansan.

Nine semesters (including two summers), a 7-0 record in Newsie-Addie softball games, more than 1,000 articles and a million happy memories later, I left the newsroom as one of the longest tenured staffers ever. So many life-changing moments arose during my four years in the newsroom: my first trip to New York City to cover the Coaches vs. Cancer Classic at Madison Square Garden; watching the horror of 9/11 unfold while sitting in the newsroom with my fellow reporters; Wilt dying; Roy staying; striking up friendships with student-athletes who remain friends today; and developing some of my best lifetime friendships, including one with Mike Rigg – another Spring 1999 freshman staffer who took the four-year Kansan journey with me.

There were a lot of pieces of the Kansan journey, from those early days as a freshman through when I walked out of the newsroom for the final time after the Spring 2002 semester, that I didn’t truly appreciate at the time, however. Many of those pieces I’ve gained greater appreciation for in the decade since, and they came into clearer focus on Sunday night at the first all-generation University Daily Kansan Reunion at the Granada Theater in Lawrence.

Quite a few members of the old sporto crew — Linney, Hughey, Melinda, Kaschube, Malashock and Prater — were there, as were some of the other long-timers like Hollar, Vaupel, Juan, Mindie, Cori, Clay, Fickett, Willis, Kursten and Borniger, as well as design guru Chris Dye and gifted photographers Matt Daugherty, Nick Krug and Jamie Roper. Advisors Tom Eblen, Malcolm Gibson and Ted Frederickson were there, too. That collection from my generation that attended served as a reminder that while I got to work with some truly incredible people on staff, the amount of talent we had in the college newsroom was staggering. 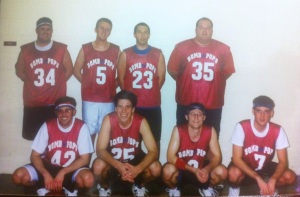 Eight former Kansan sportos playing basketball. Who would’ve thought this team would win only one game?

Collectively, we did some remarkably high-quality journalism for a room full of college kids just learning the craft. We also cranked out some crappy journalism (If you don’t believe me, then let me turn your attention to my lede for the racquetball national tournament article: “They came, they saw, they conquered. Well, not quite, but they tried hard.”), but everybody in that room had high expectations and challenged each other. We made each other better, and regularly did some of the most thorough and highest quality college journalism in the country.

Our annual haul of top finishes in the Hearst Awards offered proof from outside judges about the quality of our work. Bold and brash features like Prater’s “The Outhouse Skinny” running on homecoming weekend blended college spirit, quality reporting and fearlessness in the face of backlash. Our team effort in the handling of 9/11 proved we could do serious, but sensitive, reporting under the very worst of circumstances.

We also challenged each other’s ability to drink — and drink heavily, at times. The photo montage at the reunion offered extensive proof that such activity was not at all limited to my four years on staff.

With Angie and Chris at the Kansan Reunion. Hard to believe it’s been more than a decade since we shared a newsroom.

While the Kansan reunion brought so many of those memories into focus, the greatest highlight for me was getting the opportunity to say “thank you” to Angie Kuhn, a senior during my first semester on staff as a freshman who offered me so much encouragement and support when I was just finding my way in the newsroom. She made such a positive impression that stayed with me throughout my 14-year career in journalism (college and professional), so it was special getting to say “thank you” 13 years after we last shared a newsroom.

It’s been a long time since I asked my sister for permission to join the staff at the University Daily Kansan. I’m forever indebted to her for saying “yes,” and I’m also indebted to all of those who came into my life in the four years that followed in the Kansan newsroom. It was a magical four-year adventure, where we did some damn good journalism and had an even better time.

This was a reunion that needed to happen. Major thanks to Jonathan Kealing, Brenna Hawley and Eric Jorgensen for their tremendous efforts to make it a reality.

One comment on “A MAGICAL TIME REVISITED: THE KANSAN REUNION”