A LITTLE BIT OF LUCK AT RMNP

Posted by Chris Wristen on July 11, 2012
Posted in: Uncategorized. Leave a comment

Kicking back in a camp chair, chilly temperatures settling in at Moraine Park Campground and the sweet aroma of campfire smoke wafting through the air thanks to the just-lifted fire ban, I gazed up at Longs Peak — clearly visible in front of a cloudy backdrop  — and counted my blessings for this streak of good luck.

It was supposed to rain nonstop during my visit to Rocky Mountain National Park. The forecast was so dire that I contemplated bailing on camping and grabbing a cheap room in Estes Park instead.

On Monday night, however, the lucky streak of good weather at the start of Colorado’s “Monsoon Season” was fresh on my mind. The weather couldn’t have been much more perfect, and these days couldn’t have gone much better.

The forecast wasn’t promising on Sunday as I made the drive from Fort Collins to Rocky Mountain National Park. 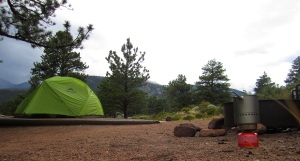 Thunderstorms were expected — at a pretty much constant clip, and for days on end — and sure enough, the first drops pelted my windshield just four miles outside of the park.

Setting up my tent in the rain was a foregone conclusion, and all indications were that most of the next two days would be spent inside that tent waiting out the storm.

As luck would have it, the rain subsided just long enough for me to set up the tent and put my sleeping bag inside. Then, the sky cleared long enough to embark on a short hike that took me to a valley packed with about two-dozen photogenic elk. The rain resumed moments after I returned to my campsite, but again the skies soon parted and allowed enough time to cook some chili mac on my MSR Reactor stove and settle into my tent for the night.

By 9 p.m., temperatures dropped into the 40s and I burrowed deep into my sleeping bag. Then the rain returned, and the gentle patter of drops on the tent lulled me to sleep.

I went to bed expecting a rainy Monday, but conditions changed during the overnight hours. I peeked out of my tent in the morning to a clear view of Longs Peak and large patches of blue sky — a good morning of hiking could be had! 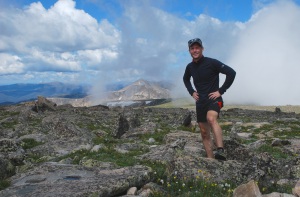 After firing up the stove to fix oatmeal and coffee, I headed to Bear Lake Trailhead and set out for Flat Top Mountain. It seemed like a reasonable target. With a little more than 2,800 feet of gain to a maximum altitude of 12,361 feet — about 350 feet higher than my 50-mile trail race in Leadville will climb — the nine-mile round-trip looked like a good wake-up call for my rested legs, as well as a much-needed test of my lungs.

I set off at a steady clip, focusing on controlling my breathing and sipping on my water hose every four to five minutes. My legs needed about two miles to wake up, but then they felt fine the rest of the way. It took my lungs about an hour to adjust to the thinner air, but the closer I got to 12,000 feet, the easier it seemed breathing became.

Including about a 15-minute break at the top and numerous stops for photos, the round-trip took me four and a half hours. Other than being hungry, I felt completely fine.  It was an encouraging effort with the Leadville Silver Rush 50 just six days away.

After an afternoon spent searching for more critters to take pictures of, Monday evening was spent simply relaxing, enjoying the fresh mountain air, and the sounds and smells of the park.

One of the greatest perks of waking up early when camping is watching the sun rise, and Tuesday morning’s 5:30 a.m. awakening was no exception.

The temperature in the 40s necessitated my lightweight down jacket and a beanie for added warmth. The payoff was getting to spend breakfast staring at Longs Peak glowing nearly red against the clear blue sky as the first rays of sun reflected off of its rock face.

The view made it worth hanging around my campsite for an extra couple of hours before packing up and hitting the road for Denver.

I expected to get soaked during my stay at Rocky Mountain National Park. Instead, I was lucky enough to spend quality time on the trails, take lots of pictures, and soak up the sun for a few days.

A return trip definitely is in order, and next time I’ll be staying longer.