Faces and places to pass the time

Posted by Chris Wristen on August 19, 2011
Posted in: Uncategorized. Leave a comment

At 7:30 a.m. tomorrow, Aug. 20, the Pikes Peak Ascent will be under way and we’ll find out if four and a half months of training were sufficient. Other than hydrating and sleeping, there’s not much else I can do now.

In the meantime, the two days of prep time in Colorado have been plenty fun, and they’ve helped make the waiting go by faster. 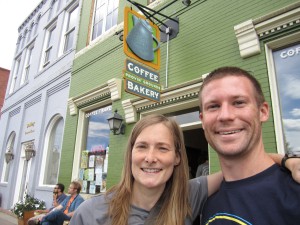 At Provin' Grounds in Leadville with Laurie.

I landed in Colorado Springs a little before 9 a.m. Thursday and immediately hit the road. My friend Laurie Euler is running the Leadville Trail 100 this weekend (her race starts at 4 a.m. tomorrow). She’s spent the week in Leadville exploring the course and acclimating to life above 10,000 feet. Anyway, the first order of business was to make the 2 1/2-hour drive to Leadville to visit Laurie. We grabbed lunch at the Tennessee Café in downtown Leadville, and then she gave me the walking tour of all five blocks or so of downtown. From what I can tell, Leadville’s sole existence is to put on epic trail running and mountain biking races — and I want to do one of the trail races next year.

After a few hours in Leadville, I headed back to Manitou Springs to check into the hotel and settle in for the evening. Shortly before arriving, Shelley texted me. She and Kelly are crewing for a runner at Leadville this weekend and were en route from Kansas City. They wanted to see me and wish me well on my race, and also knew I had a spare bed to crash in to break up the drive a bit. All three of us were exhausted by the time they arrived, so we all called it an early night.

Shelley and Kelly visited me in Manitou Springs!

We set our alarms for 6 a.m. today. They needed to hit the road for Leadville, and I needed to keep my body on schedule for race time. We made a quick jaunt to Starbucks for breakfast, snapped some photos and parted ways for our separate adventures.

As I walked back to the hotel, my path took me straight toward Pikes Peak. It looms over Manitou Springs, and the walk back is when my first serious bout of nervousness set in. I remember it being big, but it seemed much larger this morning than yesterday — and 10 times larger than it did when I saw it in late December.

Whatever. No time to worry about a mountain seemingly fueled by Miracle-Gro. I headed to the race expo for packet pick-up. Shortly after grabbing my bib number and some schwag, Rick Troeh — a fellow Kansas Citian, Pikes Peak veteran and Ascent/Marathon doubler — walked up and said hello. We’ve communicated a bit through emails and Facebook the past few months, but it was great to meet in person and see another familiar face. Who knew I had to go to Colorado to see so many people from home?

The rest of the day was low-key. I went to Garden of the Gods for a little bit, and I jogged/walked the first mile and a half of the course to familiarize myself with it and figure out a reasonable pace to start the race.

Dinner tonight was the Kiwanis Club pasta feed back at the race expo. I ran into another Kansas Citian — training partner Matty Mullins — and his family there. He’s done the Ascent about six times and is going for his first Pikes Peak Marathon on Sunday.

After dinner, I headed back to the hotel and double-checked my gear for tomorrow. The weather looks pretty good, too. Rain’s rolling in tonight, but it’s supposed to be 50s and sunny at the start; possible rain in Manitou around 10 or 11 a.m.; upper 40s and clear on the summit until rain rolls in around 1 p.m.

All in all, I’m a bit nervous tonight — more anxious, really — but ready to go. I know I did all I could to prepare.

Bring on the mountain!