Posted by Chris Wristen on August 6, 2011
Posted in: Uncategorized. Leave a comment

After four days of nervously checking the list of entrants, on March 31 my name appeared on the official list of participants for the Pikes Peak Ascent half marathon. 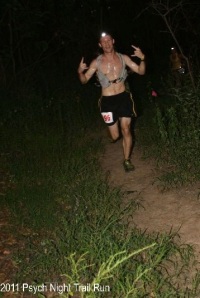 It’s two weeks until race day, and four months of tough training has come to a close. Group runs on the Shawnee Mission Park trails, hill repeats on Ogg Road, relentless humidity and numerous workouts in 100-plus-degree temperatures (as high as 111 degrees!) are done.

I chose this race for a few reasons. One, it was timely. Two, I hadn’t raced since the Free State Trail Half Marathon in April, so I wanted to step to a starting line and race prior to Pikes Peak. Third, WyCo is notorious for its endless supply of hills. Since Pikes Peak is a 14,115-foot mountain and the race includes 7,815 feet of vertical gain, hills are my best friend when it comes to training.

I didn’t “race,” so to speak, although I ran a bit faster than I’d expected to. The idea was to use it like a Pikes Peak walk-through: start slow, figure out a pace that would work, power-walk the steepest sections if necessary … and not get hurt. I accomplished the last part of the equation, even though there were tons of rocks and mud holes where the ankles wiggled and wavered a bit. As for the rest of the plan: I started faster than planned, settled into a steady pace after a mile and a half, and maintained that pace most of the way.

I power-walked the last part of the final steep hill after climbing over a fallen tree, but other than that ran all of the hills. Interestingly, I felt surprisingly strong on the hills throughout the course — a credit to the hill training on Ogg all summer (tip of the hat to Matty Mullins and Brian Brooks for making sure that became a part of my routine).

I finished 17th out of 130 runners and clocked a 59:24. Gotta admit I’m thrilled with a sub-hour 10K time at WyCo. Overall, it was a great confidence-booster heading into Pikes Peak.

Now, it’s time to taper. I’ll still be at the group runs at Shawnee Mission Park and will do a few hill repeats, although much of it will be scaled back to conserve energy and avoid injury. Time to focus on nutrition and rest.