An introductory sip of the Kentucky Bourbon Trail

Posted by Chris Wristen on May 11, 2011
Posted in: Uncategorized. Leave a comment

Exhausted, mildly hung over and ears still ringing from the thumping hip-hop music at Rock Bar the night before, six dudes piled into a rented Crown Vic and rolled a mile down the road to Waffle House.

Finding no open tables, the crew headed for Shoney’s.

It was Friday morning in Louisville and we were in full recovery mode. Thursday night was hardly wild by our former standards, but for a group of 30-somethings it was still a jolt to the system. Cinco de Mayo, mixed with a free outdoor concert and then some after-partying on our first night in town set the tone for what would be a memorable weekend.

It was still 24 hours until our trip to Churchill Downs for the 137th Kentucky Derby, so we had a day to fill.

With Shoney’s in our bellies, it was time to find something to do. Hmm … bourbon tours?

To the Crown Vic!

About 30 minutes later, and just as the scrambled eggs and side order of grits were starting to work their magic, we crested a hill on a two-lane highway in Clermont, Ky., and saw a sign instructing us to turn left. Down a hill, around a bend and back up a hill, a big red barn came into view. Painted on it was the Jim Beam logo.

This was the home of Jim Beam bourbon. We arrived just in time for the next tour. During about 45 minutes we received a brief introduction to the property and history of the bourbon, an explanation about bourbon barrels, and then we headed into the storage warehouse where row after row of wooden bourbon barrels stretched into the darkness and soared nine stories high.

The spectacle of the storage facility was impressive, but the treat came at the end with the free samples. First, we sampled a 120-proof bourbon that caused everyone to cringe. Even the slightest swig burned the nostrils. Second, we sipped an 80-proof Red Stag that went down much smoother. With a hint of black cherry, it bore a slight resemblance to a port wine.

Back in the car, we sought out our next destination. The Jim Beam tour was interesting, and we were thirsty for more. 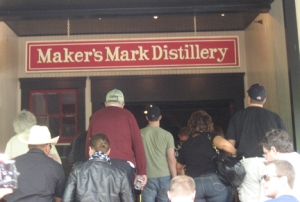 We hit the highway for Bardstown where the Heaven Hill distillery was only about a half-hour away. We rolled right past at the sight of a sign indicating Maker’s Mark was just 18 miles farther.

The two-lane highway wound up and down hills, past wooded areas and green hillsides, and through a few tiny towns. Just when we thought we’d made a wrong turn or missed a sign, we arrived at Maker’s Mark with a few minutes to spare before the distillery’s final tour of the day.

Maker’s Mark featured gorgeous plantation-style grounds and a more hands-on tour where we were allowed to dip our fingers into fermenting yeast for a taste-test. We also saw a barrel storage facility similar to that at Jim Beam, and we even got to look at the assembly line where Maker’s Mark bottles receive their trademark dipped wax top.

After a taste test of two Maker’s Mark products, we dipped our own bottles in wax. Some people — like Bru and Tim — did it properly. I nearly scorched my right hand in the melted wax by dipping the bottle so far that it’s almost completely coated in wax.

Alas, not everything could be perfect on the trip, but Shoney’s and a poorly dipped bourbon bottle were tolerable missteps on an otherwise stellar trip down the Kentucky Bourbon Trail.