Posted by Chris Wristen on April 24, 2011
Posted in: Uncategorized. Leave a comment

That point was made crystal clear Saturday at the Free State Trail Run at Clinton Lake State Park in Lawrence. In previous years the event has offered marathon, 40-mile and 100-kilometer distances, with the marathon and 40-milers receiving a heavy-duty finisher’s medal and 100K finishers earning a belt buckle.

At Clinton Lake, however, the four races covered different courses, and all involved a series of punishing hills. I’d guess there were more hills than at Wyandotte County Lake Park, and significantly rockier terrain that included about a quarter of a mile on large rocks along the shoreline where every step was tricky.

When I ran my first trail half marathon five weeks ago, I finished in 2:01.21. That course was actually 13.7 miles, and it was along the smooth, rolling hills of Lawrence Riverfront Park. This time around, my goal on the 13.1-mile Clinton Lake course was to break two hours.

It didn’t take long for it to become abundantly clear that this would be no ordinary jog through the woods — or that a sub-two wouldn’t be happening.

Some courses simply won’t allow a personal record to be set. Some courses are designed specifically to kick your ass. This was one of those courses.

My first mistake was getting boxed in during the first 50 yards before we turned off of a gravel road onto narrow single-track trail in the woods. I spent the first 19 minutes trapped in the logjam of runners before making enough passes to find some space and settle into race pace. At that point, I had no idea exactly what pace I was running, and I never quite figured it out. A steady serving up fast downhill sections, switchbacks and steep uphill climbs quickly fatigued my undertrained legs. 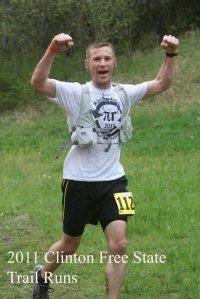 At the point that I wrongly assumed was about five miles in, the course left the woods, crossed the same gravel road where we’d started and dove into the woods on the other side. More hills and switchbacks followed, and then the course tuned to the shoreline where the footing was surprisingly challenging and it was necessary to slow down to avoid busting an ankle.

Even more hills followed before reaching the first manned aid station which I figured, based on time, had to be around the eight or eight-and-a-half-mile point. Upon asking, I was told it was maybe seven miles in, and we’d already been going for 1:25.

The terrain remained the same the rest of the way. Up, down, water crossing, back up, down again and right back up.

In addition to GU packets and Clif Shots, I bolstered my in-race nutrition with salt caplets for the first time in an attempt to fend off calf cramps that have been a constant problem for me in longer races. I took a salt cap every 40 minutes and washed it down with plenty of water. Although I was fatigued, cramps were a nonfactor until about 10 1/2 miles in when the first slight pinches began to set in on both legs. At one point, my right calf began to cramp hard and I was forced to stop and press my heel down against a rock to stretch it out. The final 2 1/2 miles were a mixture of walking and jogging. Thanks to encouraging words from some fellow runners who pulled me along, the final few miles ticked away and I soon popped out of the woods, back onto the gravel road and made it up the hill to the finish line where Bad Ben stood smiling and ready to greet finishers with a firm handshake, some congratulatory words — and a hard-earned finisher’s medal.

It was a relief to be done. Thanks to a nagging foot injury, I wasn’t trained nearly as well as I should have been. I knew that going in, even as I’d held out hope for breaking two hours.

As it turned out, the only way that would have been an attainable goal would have been if I’d borrowed someone else’s legs and lungs. Only two runners broke the two-hour mark.

Initially disappointed with that time, my perspective changed within a few hours as I reconsidered the course and gained much greater appreciation for what the marathon, 40-mile and 100K runners must have endured. If the half marathon course was this tough, what did they face?

Depending on the terrain, sometimes it’s important to simply appreciate the fact that you finished.

Besides, when Bad Ben’s handing out medals he’s going to make you earn them.