Kansas: On the Rocks

Posted by Chris Wristen on March 19, 2011
Posted in: Uncategorized. Leave a comment

When it comes to natural beauty, Kansas isn’t exactly Colorado in terms of large rock formations to gawk at or mountains to scale. 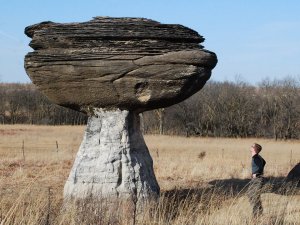 But it turns out Kansas has its own version of Garden of the Gods … sort of. Last month when I was initially planning to pay a visit to Kanopolis State Park while in Salina to cover the state wrestling tournament — an idea that was scrapped when a snowstorm rolled in — trail running friend Nick Lang recommended also visiting Mushroom Rock State Park.

He insisted it wouldn’t take much time, but that it would be time well spent.

Last week, I returned to Salina to cover the basketball state tournament. This time the skies were sunny and the temperature was unusually warm for early March. I tossed my hiking boots in the trunk and made plans to head to Kanopolis.

I set out early Friday morning from my Salina hotel, and when I was about five miles outside of KSP I saw a sign for Mushroom Rock State Park. I made a right turn and drove about two miles down a dirt road.

Suddenly, there it was — all five acres of it.

Mushroom Rock State Park is Kansas’ smallest state park, and it’s exactly what its name implies. It has a few big rocks that look like mushrooms. The formations are sandstone and sedimentary rock that have been shaped by the elements.

Only a few formations exist, which is what makes their existence in the middle of a field so bizarre.

There wasn’t much to do at the park besides gawk for a bit, snap a few photos, take a bit of video and then head back down the road toward Kanopolis. It was worth taking a peek, though, and will be a good picnic stop on future trips to the area.