Posted by Chris Wristen on February 13, 2011
Posted in: Uncategorized. Leave a comment

Moments after crossing the finish line, Bad Ben — the godfather of Kansas City trailrunning and all-around badass — was there to greet me with a smile and firm handshake before handing me my prize.

It’s a long-term reminder of the pain and punishment my legs endured, and it commemorates the longest race I’ve ever completed.

It’s a milestone and a stepping stone. I plan to run a trail half-marathon this spring, and I want to earn one of the understandably larger, shinier, heavier medals that go to those psycho enough to take on the Run Toto 20-mile and 50K options.

The greatest obstacle to completing one of those runs may be mental, because I can’t fathom just how hard it must have been to do a second or third loop on the course. The 10-mile loop was challenging enough.

I had an idea how tough the course would be before the race even started.

While riding the shuttle from the marina parking lot to the starting line, I saw trail markers in the woods nearby. They were in the same location as last fall’s Veteran’s Day four-miler — a race which included the steepest hills I’d ever run. Those same hills marked the final two miles of the Run Toto loop — only this time they were coated in snow.

The knowledge that a rugged finish awaited remained stuck in my mind every step of the way.

The morning began with temperatures in the 20s and they rose into the 40s as the day went on. Still, multiple rounds of snow during the past three weeks left the entire park coated in white. The trails were no different. Depth ranged from ankle-deep snow to well-packed but icy. I screwed my shoes for the first time ever — and thank God for that. Even with a dozen screws drilled into the bottom of each shoe, footing was still tricky on icy patches, steep inclines and out-of-control, switchback declines.

The slippery footing, along with the constant ups and downs made it difficult to maintain pace. Balance was a constant battle. 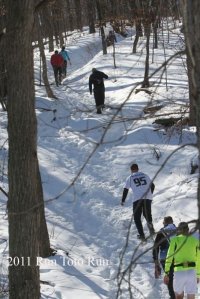 The final five miles were labeled with distance markers every half-mile counting down to the end of the loop. It was an unexpected but welcome inclusion because I could eye my watch and the signs and finally settle into a steady place. Plus, it allowed for a mental countdown to the finish line.

Some of the trickiest inclines were in the final half of the loop, whether it was a three-foot step-up that required grabbing onto trees for support, or fallen trees that had to be climbed over. All the while, I knew the hardest part remained in the final two miles.

Sure enough, those final miles were as tough as I expected — but not for the reasons I remembered. The steep, rocky inclines and declines had to be dealt with, but the greater problem was that my calves began cramping moments after I passed the eight-mile marker. The muscles tried to lock up every fourth or fifth step, forcing me to hobble to maintain balance before ultimately slowing to a shuffle. Suddenly, those final distance markers couldn’t arrive soon enough.

As luck would have it, right about that time I caught up to some of the 20-mile and 50K runners who’d started an hour earlier but were running at a slower pace. We exchanged words of encouragement, and I adopted their pace for a bit to get me through the final few minutes before crossing the finish line and receiving a smile, handshake and dog tag from Bad Ben.

My hope was that I’d complete the 10 miles in around two hours, although ultimately I simply wanted to finish.

I was relieved to be done, but I was far more content a few moments later thanks to another dose of generosity from the race organizers and support staff. A literal smorgasbord of post-race goodies awaited us, from peanut butter and jelly or Nutella wraps, to water and energy drinks, fruit and cups of hot, homemade soup. Talk about a treat!

Run Toto is the farthest race I’ve completed so far, and it’s without a doubt the hardest race I’ve ever participated in. It’s also the most well-organized and well-staffed race I’ve done. Every last detail was done well, and it made for a motivating and memorable experience.

I’m already looking forward to next year’s race — but until then I’ve got my hard-earned dog tag as a reminder.